See our new "On My Way" ROC Express feature. You can now reserve your spot in line at any of our ROC Express locations.

What constitutes a stiff shoulder, elbow, forearm, wrist, or hand?

Normal or good range of motion of the upper extremity is of critical importance in the ability of human beings to be extremely proficient at performing a multitude of different tasks with their hands such as writing, sewing, quilting, throwing, climbing, controlling, grasping, pinching, eating, swimming, and many more. A stiff joint is essentially a joint that does not have enough range of motion or ability to move in enough direction to accomplish these tasks.

How does one know if he or she has a stiff joint?

One can often realize if he or she has a stiff joint by comparing the one in question to their normal side. However, stiffness from many causes can be bilateral. Normal range of motion in humans beings is very consistent between normal individuals, so a comparison can often be made with other individuals in ones’ life. However, one can always seek medical attention to get answers.

What are some of the most common causes of a stiff or contracted joint?

While some causes can be specific to the particular joint of the upper extremity, there are a few causes that all joints have in common, such as arthritis, neurologic injury (involving the brain, spinal cord, or nerves), fracture (please see fracture section for more information on a specific fracture), or lack of use over an extended period of time. Other common causes specific to a particular joint include “frozen shoulder,” rotator cuff tear in the shoulder, and Dupuytren’s contracture in the hand.

What are the symptoms of a stiff joint from arthritis?

The shoulder, elbow, forearm, wrist, and hand, including the finger joints can all be affected by arthritis. Arthritis comes in many forms including “wear and tear” arthritis, which is called osteoarthritis. There are other types of arthritis, which are autoimmune in nature such as rheumatoid arthritis, lupus, and psoriatic arthritis. The joints often lose the amount of motion that they once had, often have swelling, aching pain, and a sense of clicking, crunching or grinding with motion.

What are the symptoms of a stiff joint from a neurologic injury?

The shoulder, elbow, forearm, wrist, and hand including the finger joints can all be affected by a neurologic injury. Central causes of a neurologic injury include stroke (bleeding into the brain or lack of blood flow to the brain), traumatic brain injury, cerebral palsy (lack of blood flow to the brain during child birth), and spinal cord injuries. Peripheral problems can also lead to stiffness and contractures; causes include problems with the brachial plexus (the web of nerves in the neck as they transition from the spinal cord to the nerves of the arm) as well as injuries to the nerves themselves within the arm. When these types of neurologic injuries occur, the patient may want to move their shoulder, elbow, or hand but the mind simply cannot provide the necessary neurologic signal to make motion occur. Over time if a joint is not moved frequently enough or through the joints full normal range of motion, it will start to stiffen and contract. When this occurs an attempt to move the joint by the patient himself or by the doctor can become extremely painful.

What are the symptoms of a Dupuytren contracture of the hand?

Dupuytren’s disease is not a contractible disease, but rather an acquired disorder in the hand that is believed to be related to a few predispositions such as being Caucasian of Northern European descent and consumption of alcohol; however, the exact cause of Dupuytren disease is unknown. The tissue or bumps in the palm causing the contracture is an overgrowth or hypertrophy of fascia which is a tissue normally found in the palm that holds the skin down tight to the fat and muscle under the skin. This overgrowth of tissue is benign and not cancerous, but it can on rare occasions recur locally after treatment. The symptoms of this type of contracture include a thickening of the skin in the palm most commonly affecting the ring and small fingers. The thickening is often a band or tissue (called a cord) which pulls on the joints of the fingers causing the fingers to contract into the palm. This is often associated with the inability of an individual to be able to place their hand into a glove or pocket or difficulty with fine motor tasks. In general, Dupuytren contractures are not painful, but can be if the skin starts to dimple to the extent it can crack and callous. There are often more mild cases of thick skin in the palm which is on the spectrum of Dupuytren’s disease but is without contracture, dysfunction, or pain and does not benefit from any type of treatment. 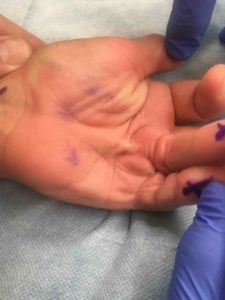 What are the non-operative treatments for a stiff shoulder, elbow, or hand?

Physical therapy is of paramount importance in helping patients maintain and restore normal upper extremity range of motion. Hand therapy is very similar to Physical therapy, but is its own subspecialty branch of the field called Occupational therapy. A hand therapist is often more specialized than a physical therapist at managing complicated hand problems and is typically preferred over physical therapy for those issues. Common modalities used by a physical or hand therapist include massage, manipulation, stretching, ultrasound, application of topical anti-inflammatories, electrical stimulation, and heat. Therapists often also treat contractions with splinting which can stretch a joint into a particular direction that is lacking to help recover range of motion. Other non-operative treatments include corticosteroid (anti-inflammatory) injections and oral anti-inflammatories. Non-operative treatments specific to Dupuytren’s contractures include the injection of an enzyme called collagenase, which is a protein enzyme made in a lab and proven with research to be effective at dissolving the Dupuytren cord enough that the doctor can manipulate or stretch the affected finger and snap or break the cord releasing the contracture. The cord can also be cut percutaneously with a sterile needle placed through the skin. These techniques however are often limited by the severity of the Dupuytren contracture.

What are the surgical treatments for upper extremity contractures due to arthritis?

For an arthritic joint which has lost its smooth shiny white cartilage resulting in bone rubbing on bone, the joint can be replaced. This includes the shoulder, elbow, wrist, and the small joints of the hand. For every joint in the upper extremity there is an artificial joint capable of replacement. Larger joints are typically made of metal and plastic, and the smaller joints of the hand are often made out of silicone. The use of these joint replacements is often limited by the patient’s age, as they will not last forever, but typically last at least 15 years before the replaced joint needs to be replaced or revised again. For younger patients who are physical with sports or labor-intensive occupations, an arthritic joint may also be fused instead of replaced. Although a fusion permanently eliminates the affected joint’s motion it also reliably eliminates the arthritic pain and often allows patients to return to their physical sport or occupation with improved function.

What are the surgical treatments for upper extremity contractures due to a neurologic injury?

Stiffness or lack of motion from a neurologic injury can be very difficult to treat surgically, but there have been many medical advances over the last several decades which have helped surgeons effectively treat these problems. If a joint lacks motion and does not have arthritis, a surgeon can often go into the joint and break up adhesions and scar tissue and then manipulate the joint to restore motion. This is particularly true for the shoulder and elbow. For a joint that lacks the nerve and muscle power to move the joint independently, the joint will move with good range of motion if the doctor or the patient’s opposite hand manipulates the joint. Certain procedures can be done to restore enough strength to power the joint. The surgeries often used in these situations are called tendon and nerve transfers. A tendon transfer is a procedure where there are multiple tendons with duplicate function in which one tendon can be rerouted to another tendon to restore a particular function or motion. For example, if a patient is unable to extend his or her wrist in the direction of the back of the hand, then a hand surgeon can reroute one of several tendons that bends the wrist in the opposite direction to restore this function without significantly sacrificing function. Similarly, nerve fibers with duplicate function can be rerouted and sewn under a microscope into the nerves lacking a particular function. These procedures require a dedicated amount of hand therapy after surgery to retrain the brain to restore the missing function, but they can be extremely reliable and effective.

What is the surgical treatment for Dupuytren’s contractures?

For certain patients where the contracture is severe or has recurred after enzyme treatment, surgery can be a very reliable option. If that is the case, the hand surgeon can make an incision in the palm and excise or remove the over-grown fascia and restore range of motion. Depending on surgeon and patient preference this procedure can be done under just local anesthesia with numbing medication injected into the palm while the patient is wide awake during surgery. If a patient is uncomfortable being awake during surgery they can also receive general anesthesia. This procedure is very effective and reliable at restoring hand range of motion, but does require approximately four to six weeks of splinting and hand therapy after surgery to be most effective.

There are a multitude of causes for stiffness and contractures involving the shoulder, elbow, and hand. These problems can result in significant loss of function to a patient’s hobbies, occupations, and even activities of daily living. There are many reliable ways of restoring range of motion and strength to a joint, thereby improving function. If you think you have a stiff, contracted, or weak joint, you may be a candidate for one of the above-mentioned procedures.