See our new "On My Way" ROC Express feature. You can now reserve your spot in line at any of our ROC Express locations.

What is a Disc?

Disc material is mainly composed of water and other proteins. As a normal part of aging, the water content gradually reduces. This can cause the disc to flatten out and even develop tears or cracks throughout the annulus fibrosus. These discs are often referred to as “degenerative” discs and may or may not cause pain.

In the case of a degenerative disc, the inner jelly material (the nucleus pulposus) can bulge out and press up against the annulus fibrosus. This can stimulate the pain receptors causing pain to occur. The cracks or tears that develop within the annulus fibrosus can also become a source of pain. Finally, the inner nucleus can also come out through the cracks in the annulus and compress nerves or spinal cord, a condition that may cause weakness, pain, pins and needles or numbness, and may require surgery.

Non-surgical options for people with disc protrusions in the neck include rest, heat, pain medications and physiotherapy. When non-surgical treatment options fail, surgery is often the next step. This usually means spinal fusion surgery. Neck pain with compression of the nerves in the neck or spinal cord is a common condition that affects the spine and may require surgery. If only nerves are compressed, with symptoms in one arm, a period of conservative management is instituted and if this fails surgery is contemplated. Early surgery is performed if there is severe weakness or pain that cannot be effectively controlled with available analgesia. If the spinal cord is being compressed, surgery to decompress the spinal cord is usually recommended. This compression can be caused by bulging disc or bony spurs.

(Above left): MRI scan of the cervical spine showing a typical disc protrusion between the 5th and 6th cervical vertebra compressing the spinal cord

(Above middle): A Schematic diagram of a typical anterior discectomy and fusion procedure. A block of bone graft is placed into the space left when the disc is removed

(Above right): A postoperative x-ray on the patient shown to the left. The disc has been removed, a block of bone has fused the 5th and 6th vertebrae and a plate with screws holds it into place

This is a common operation and often no bone graft from the hip is taken nowadays. Instead bone from a bone bank (donated cadaver bone called allograft) or plastic cages filled with bone substitutes are used. Whilst it takes pressure off the spinal cord, it necessitates that at least 2 of 7 bones in the neck are fused. This does reduce some of the movement in the neck, but patients typically do not notice it unless several levels are fused. Typically after this surgery, the patients were a neck brace for 6 weeks.

The problem with fusing bones in the neck are that adjacent levels in the neck are placed under more strain. This has increased “wear and tear” at the surrounding disc space levels has been termed “adjacent segment stenosis”. We now know that if 10 people have a single level fusion, at 10 years 3 have had to have another operation for narrowing at the next level either above or below. Secondly, the bone does not always heal or “fuse” correctly. In fact, the overall success rates for these procedures range from 48% to 89%. Finally, spinal fusion at one or more levels increases stress to the rest of the spine. This transferred stress may cause new problems to develop at the other levels, which may lead to additional surgery.

There are clear reasons for not putting in artificial disc and doing a fusion instead.

A new technique which has been available throughout the world since 2001 is removing the disc and then replacing it with an artificial disc. This has 2 main benefits:

Consequently, patients undergoing decompression and placement of an artificial cervical disc do not need a brace after surgery and may need less surgeries on their neck in the future.

The idea of spinal disc replacement is not new. It was first attempted 40 years ago when implanted stainless steel balls were implanted into the disc spaces of over 100 patients. These pioneering efforts were followed by more than a decade of research on the degenerative processes of the spine, spinal biomechanics and biomaterials before serious efforts to produce an artificial disc resumed. The Bryan cervical disc prosthesis represents a state of the art disc prosthesis, although several are now available. A newer prosthesis, termed Prestige LP® (see below), is also available, outside the US) working as a ball and socket system. The choice is made by the surgeon and tailored to your spine. Worldwide there are at least a dozen in place. 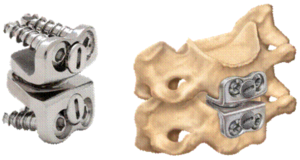 The Prestige Disc is the first artificial cervical disc that will be available in the US. The is a ball and trough design and mimics normal cervical motion. It is made of stainless steel so postoperative MR scans have a lot of artifact. It is secured to the bone with screws and is useable for one level disease only. The FDA study comparing Prestige to fusion was favorable for the disc.

The Bryan Cervical Disc System is a composite type artificial disc designed with a low friction, wear resistant, elastic nucleus with two anatomically shaped metal plates. A flexible membrane forms a sealed space and contains a lubricant to reduce friction and wear and tear. The implant allows for normal range of motion and comes in five sizes. Expect US release in 2008

(Above) X-rays of the cervical spine after implantation of an artificial disc. Normal movement is preserved.

The initial clinical experience with the Bryan Total Cervical Disc Prosthesis has been promising.

(Above right): A skeletal model of the cervical spine showing how the artificial disc is placed.
When Not to Have an Artificial Disc (click here)